The plan today was to drive from Prescott thru Jerome, Sedona, Flagstaff, Winslow, and on to Holbrook and the Petrified National Forest. The trip started out that way, under gray skies. Jim drove as the road to Jerome was a bit mountainous and twisty. I don’t do well with twisty and mountainous. Either one alone is enough to slow my normal foot-to-the-floor driving to something less than the posted limit. Add the two together, and I am driving pretty much at a dead crawl. Jim said he wanted to make the drive at something faster than 2mph.

“Mountainous and twisty” was a major understatement. There were places where there wasn’t even a token guard rail, nothing between the road and oblivion several tens of thousands of feet down except some sticks with reflectors on them. I’m sure it was tens of thousands. It looked like it went down forever. I practiced my deep-and-even-breathing techniques. I practiced a lot. In a couple of places, I closed my eyes to improve my deep-and-even breathing. I couldn’t face the edge of the road, the twists in the road, or the distance to the bottom if we fell off the road. If I hadn’t known what a hairpin turn was, I was given far too many examples today. Jim mentioned Sunday night that my “waHOOs” thru the thunderstorms had unnerved him a bit. He had a bit of revenge today, as those roads unnerved me a lot.

For those of us not comfortable with mountain roads, seeing the road before you, or in this case, below you, is, um interesting.

That’s where we were. At least there’s a railing.

On an overcast day, the heart-stopping beauty of the red rocks of Sedona can’t be seen here. Having been thru here at dawn, the colors are breath-taking.

Jerome was just as I remembered. It’s quite literally built on the side of the hill.

but the best view for seeing the shape of Jerome is from below.

Jerome has the same twisty roads and hairpin turns as the road above. But there was no chance of falling off the mountain, as the buildings would get in the way.

At one point, we got stuck behind some poor guy who couldn’t quite make up his mind which way to go. The sign said “parking.” The road to parking was a narrow, one-way road, going steeply up the hill. A deep breath was taken, and the driver went up the hill to “Parking.”

The buildings were old, quaint, and in some cases, falling down. The town has turned into an art community, with stuff ranging from locally produced really cool stuff to kitschy tourist trap stuff. 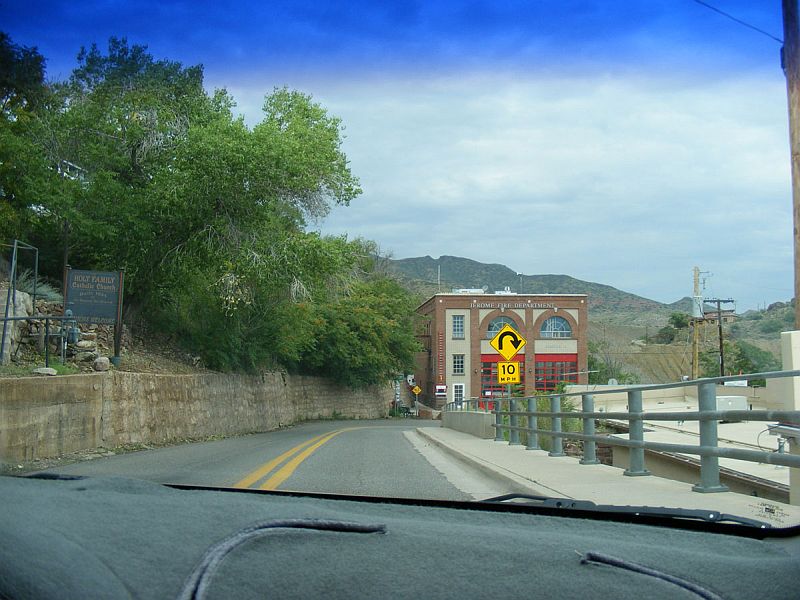 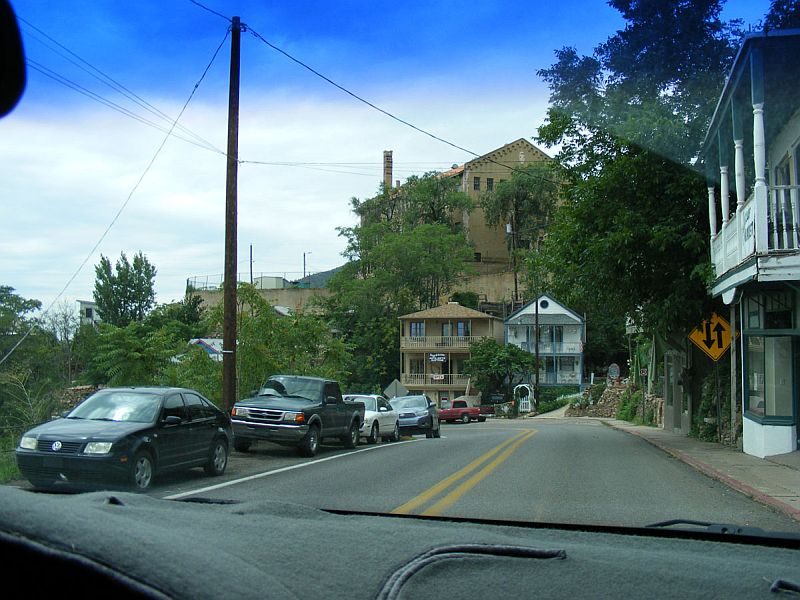 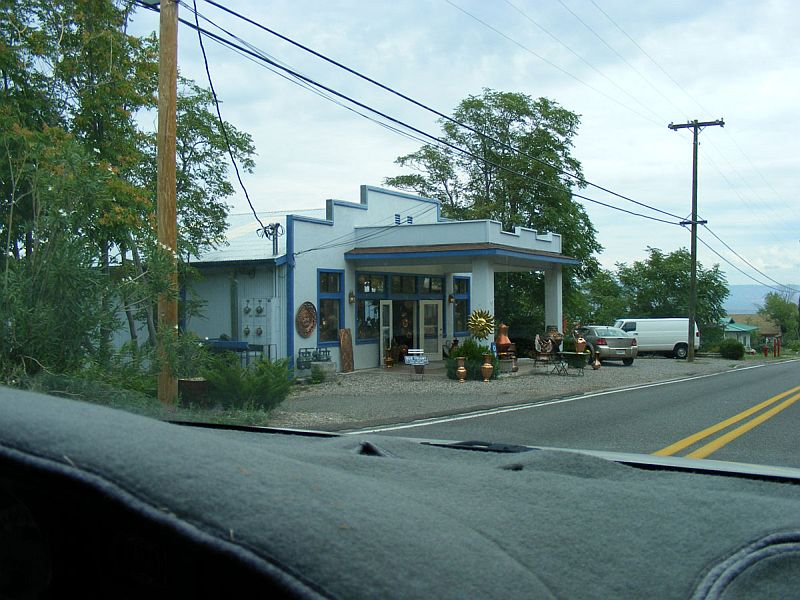 The road to Sedona was quite green as befits an area called Verde Valley. It’s apparently growing quite nicely as there were several new buildings under construction, and large sections of the roadway were being widened.

Under the gray skies, the gorgeous red rocks of Sedona, normally vivid enough to take your breath away, were merely striking. 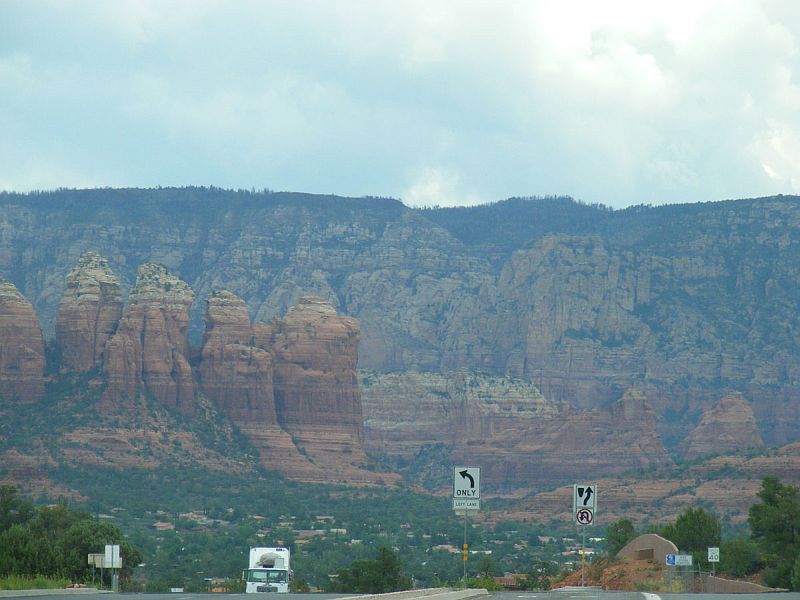 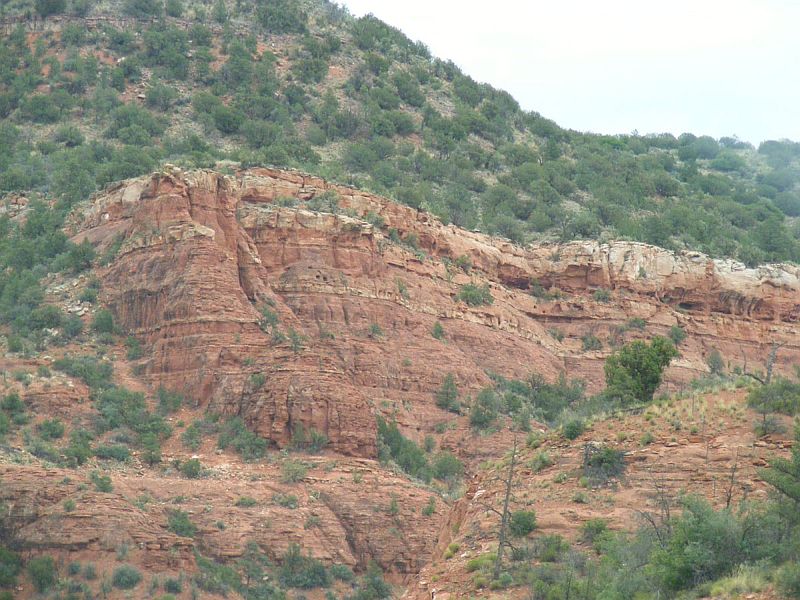 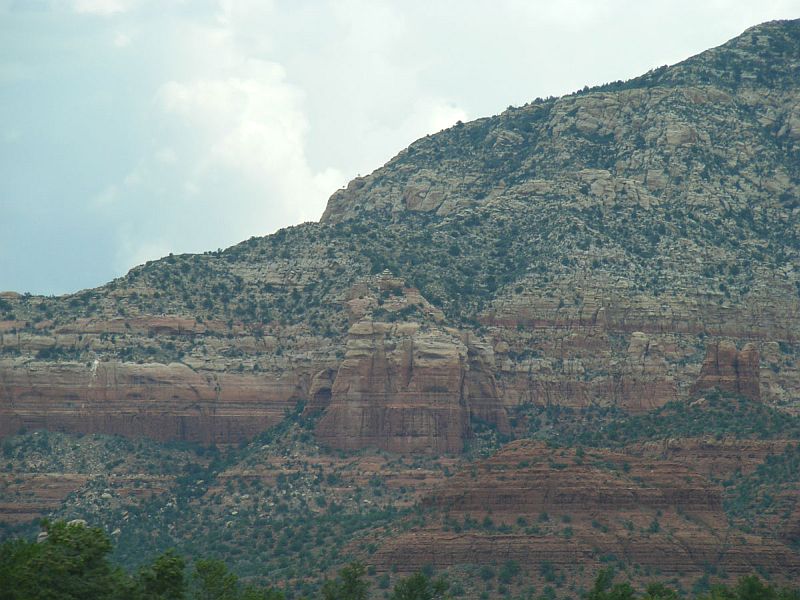 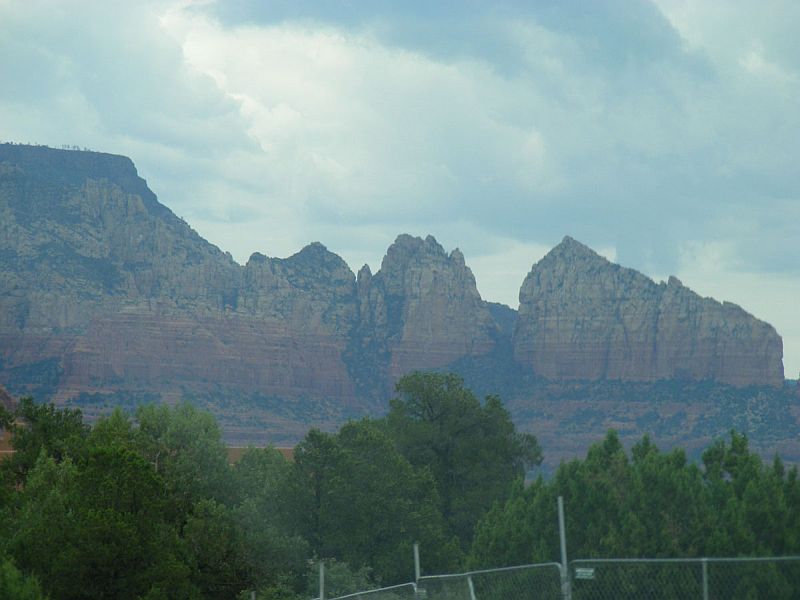 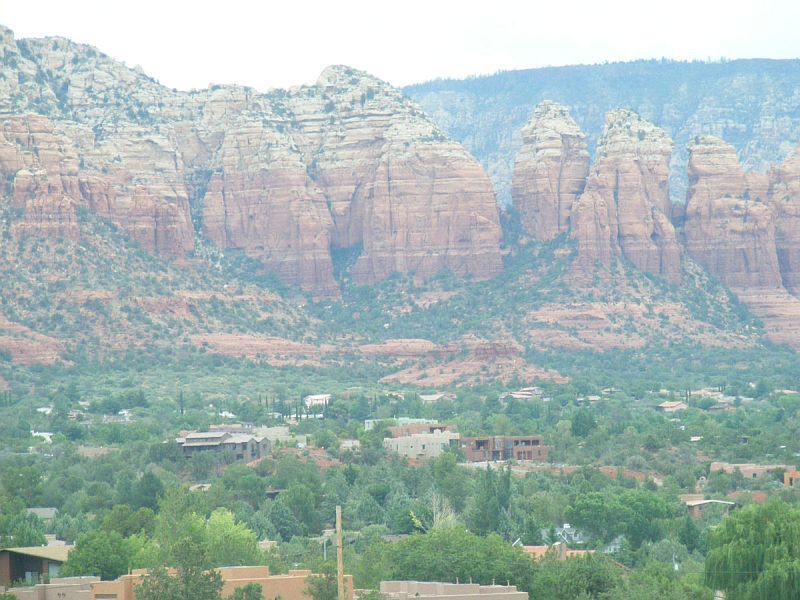 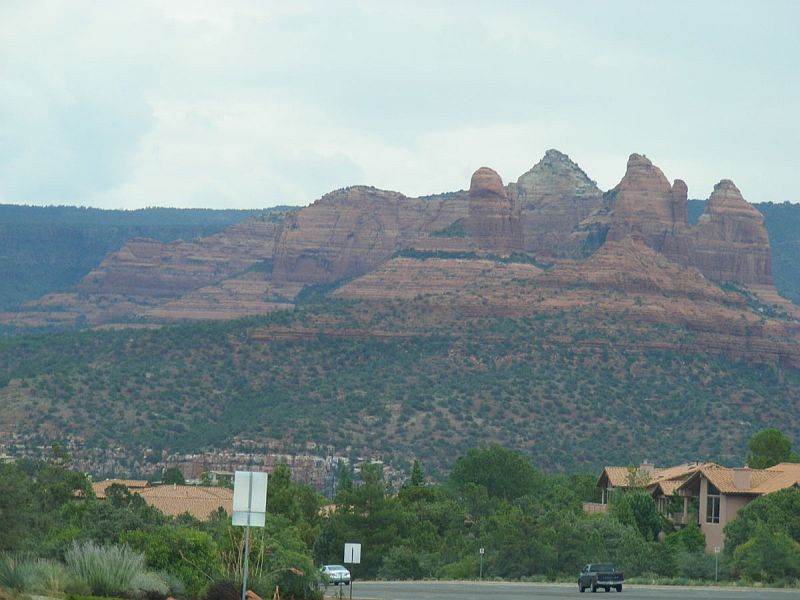 The spires and pillars of Chimney Rock and other well-known formations were a stunning backdrop to the homes and businesses of Sedona, even without the sun’s direct light. (The blue stripe at the top is the shading on the windshield.)

It turns out there’s a longer, less mountainous route to Flagstaff, and a shorter route thru, you guessed it, twisty mountain roads. The shorter route, Highway 89A, went up Oak Creek Canyon, lovely and green. Sycamore, pine, spruce, ivy twining thru the trees.

The cliffs above us showing the bones of the earth in stripes of rust red and beige. Scattered along the creek are homes, shops, campgrounds.


As we go further up, the canyon narrows, and finally we ascend the cliffside to Flagstaff. At the top was a visitor’s station, very welcome restrooms (it was a long way up the canyon), and a view point. A truly stunning view point, back down a segment of Oak Creek Canyon.

This is probably the east side of the thunderstorm over Flagstaff that almost drowned us the night before.


Catching I-40 again, heading east. The vegetation changes from pine forest to scrub trees to sage and other small brush scattered across the landscape.

I adore that part of Arizona. I have many summers’ worth of wonderful memories spent in Winslow, on the high desert. I feel very much at home here.

I decided that I’d seen the Petrified Forest already, and wanted to go on into New Mexico, which I had only seen once, from a bus window thirty years ago. I drove from Winslow, so there aren’t as many pictures. The landscape around the Petrified Forest and Painted Desert had mesas with those wonderful Painted Desert colors. Not too far from the road were several mound-like mesas, looking remarkably like petrified layered deserts.

As we approached the border to New Mexico, the land rose and got greener. Water could be seen in some of the washes, and there were thunderstorms in the distance.

Then we came over a rise and saw the most amazing mesa. It looked like a painted backdrop for stage. The road to the right of the main highway is old Route 66, the Mother Road. I-40 paralled Route 66 all the way into Albuquerque.

The cliffs up close.

We arrived in Gallup, in plenty of time to find a new hotel when the first one couldn’t get their wireless connection to work in the area of our room. They said it was due to the thunderstorms in the area. So we pack everything all back up, head back down the road. Check in to new hotel, set up the computer, finish a project and collapse for the night.

Sunflowers behind the hotel.