Many years ago, my mother described the freeway system in Salt Lake City as having been designed by a drunken snake. Downtown Santa Fe used the same snake and added a sadist.

My needs were simple. I wanted to see the Loretto Chapel, the one with the miraculous spiral staircase. Maps were unfolded, instructions were requested of local hotel staff, and off we started.

And discovered you can’t get there from here.

Roads in the heart of downtown Santa Fe are, of course, leftovers from horse and buggy days. And from the days when laying out streets in straight lines was a thing for the future. They were narrow and often one-way. And not quite the way the map showed them to be. Due to road construction, and due to the fact the central plaza was blocked to auto traffic, we meandered all over the place, frequently totally clueless as to where we were in relation to where we wanted to be. “The map says we want to turn left here.” “Wait, we can’t turn left here.” “Well, then, turn right.” “Turning right… oh, the road’s blocked down there, now we have to turn left.” And now we’re headed in the totally opposite direction. We did get to see the Santa Fe River several times, as we criss-crossed the downtown area.

Jim can’t read really small print, and the street map was in really, really small print to be able to fit it all in. I finally found a free public parking lot, the sign of which told me that I would be given a ticket if I didn’t get a parking pass from the attendant. There was no attendant. I parked anyway. I read the map. One of the blessings(?) of being dreadfully near-sighted is I can read really fine print. I found where we were, where we wanted to go, the streets to get there, and started off. Silly me, I didn’t verify the names of some of the other streets.

Out of the parking lot, still with no attendant, left onto Paseo de Peralta. Right on Washington, which according to the map turned in to Santa Fe Trail.

I found upon reaching the point where Washington should become Santa Fe Trail that a building now occupied the space, requiring a left turn because the right turn was blocked to thru traffic. Now, I’m “off the map” again. Left, right, blocked, left, left only because it’s a one-way street, right, past a wonderful unreachable multi-story parking lot because the entrance was on a one-way street with traffic against me, with the other end of the street somewhere around a bend, around in circles (Paseo de Peralta makes a big horseshoe shape around downtown), and back to that very same parking lot.

Santa Fe is suffering from a “beautification” project that said every building on a major street has to look like a pueblo. Gas stations, cheap eateries, even a no-tell motel. Housing tracts, hospitals, the fire station. The McDonald’s!! Downtown not only was suffering from this disease, but was suffering this disease in the exact same “adobe” brown color. There were a few buildings built in an “Old West” style that had so far escaped adobification. But the rest, OY! 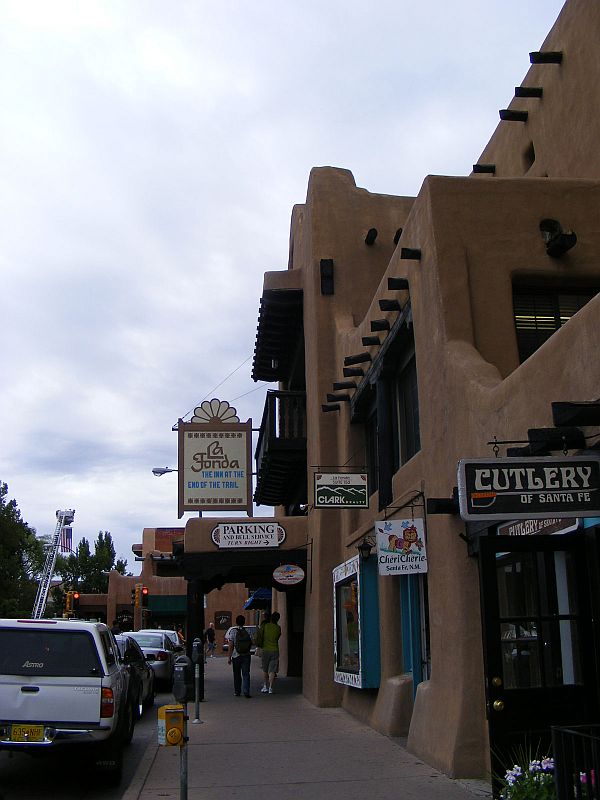 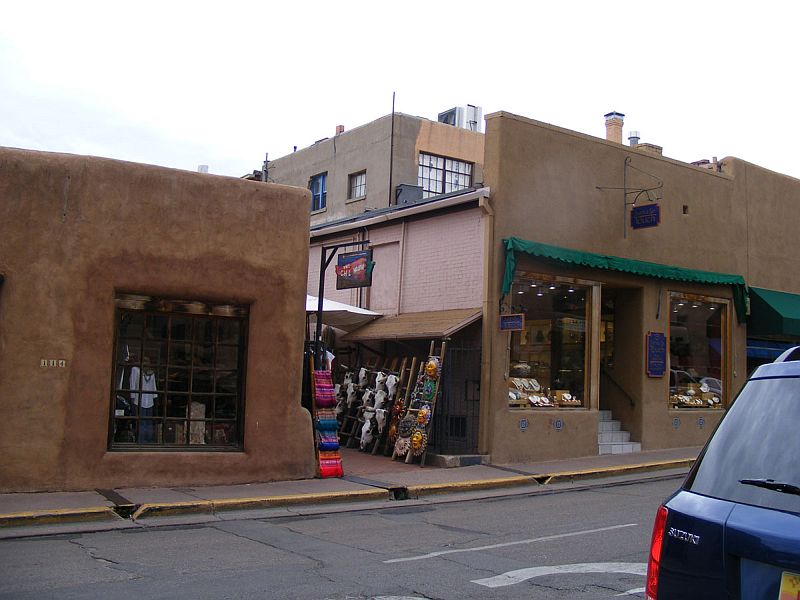 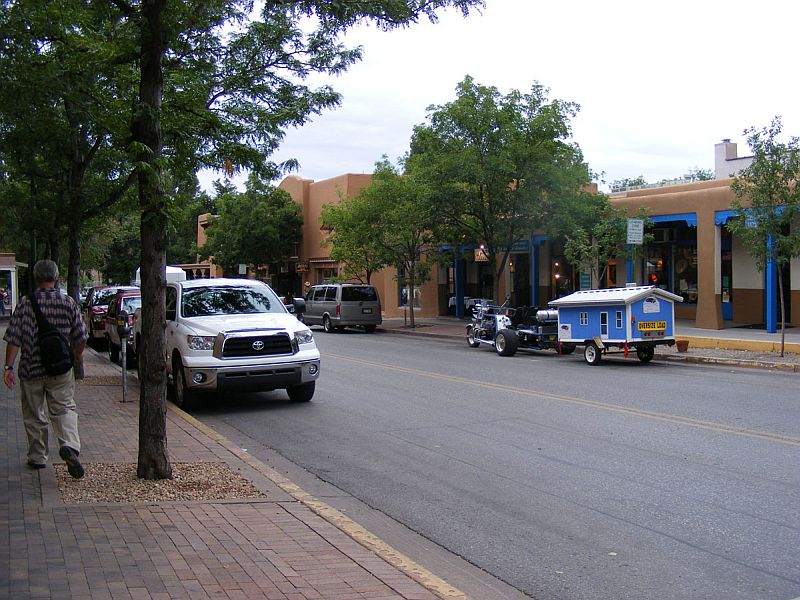 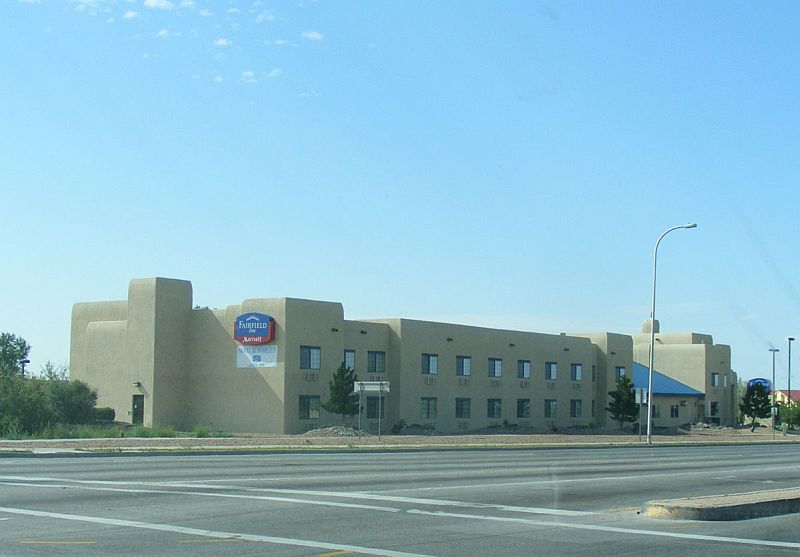 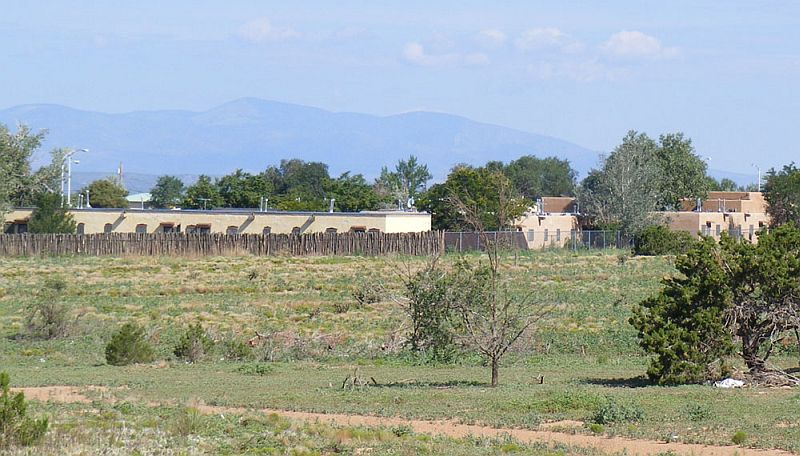 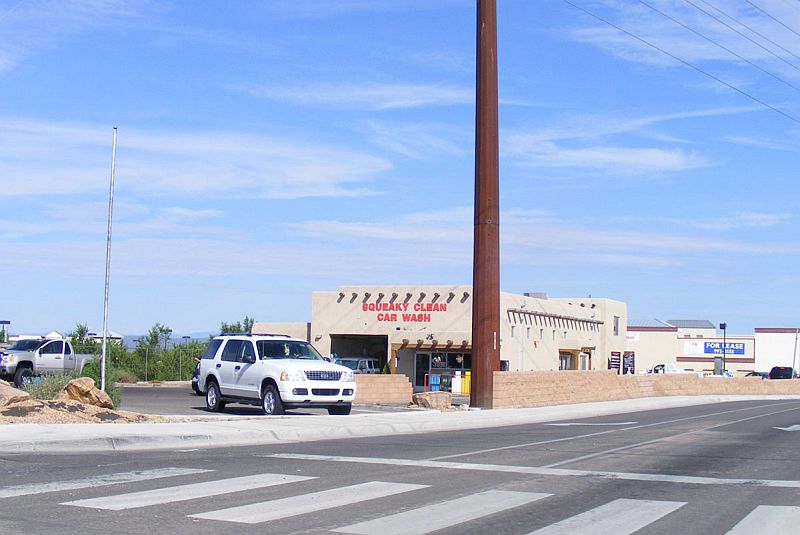 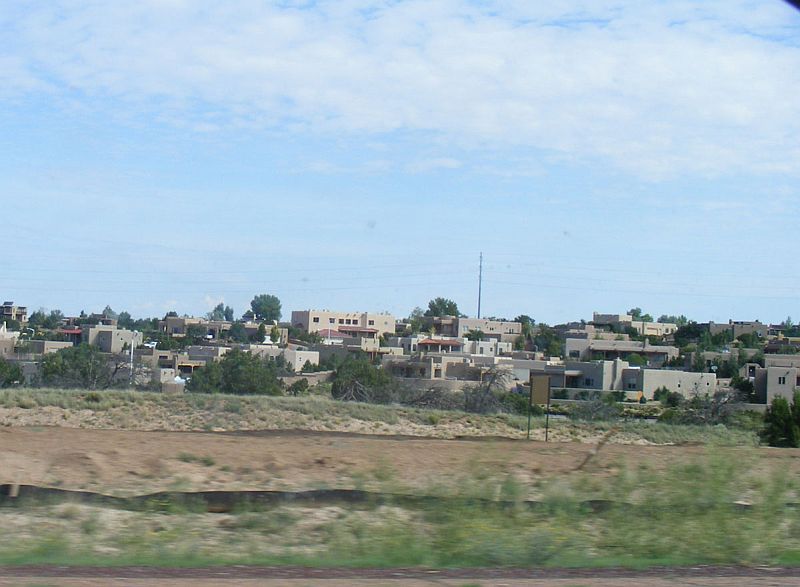 Some of the claims made for the staircase have been disproven by Snopes. It’s still an amazing structure, and amazingly beautiful. I’m one of those people that likes to know how things are built, so knowing this doesn’t destroy any of my sensawonda. What’s also amazing is that almost all the pictures I took came out blurred. I can take decent shots from a moving car, but not here. Here are a couple that came out ok, as well as one of the front of the chapel. 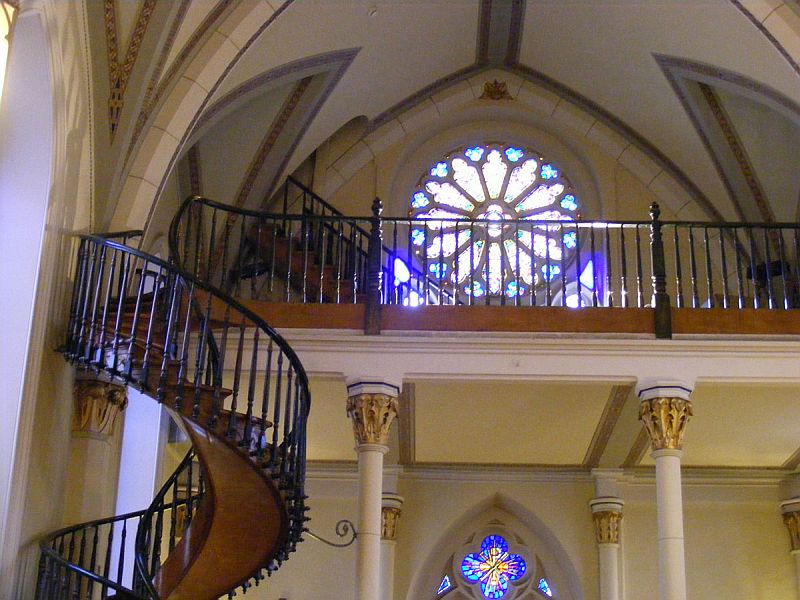 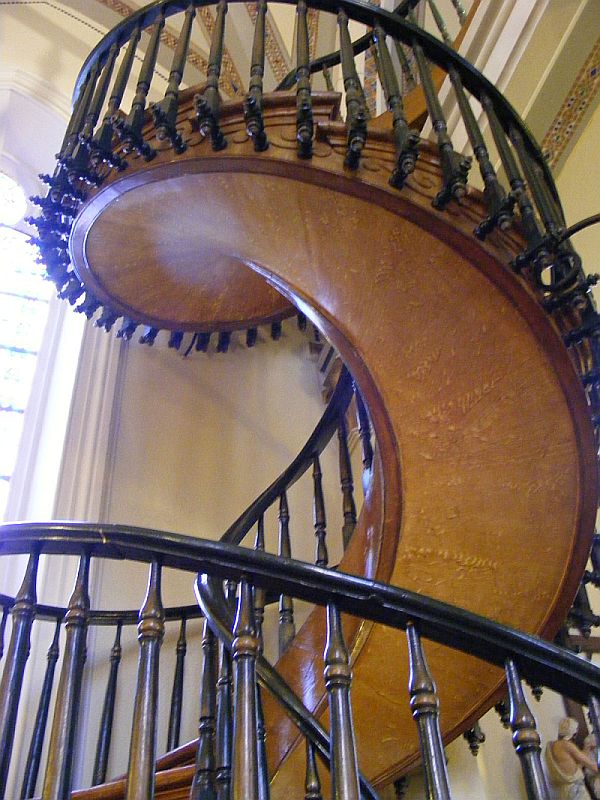 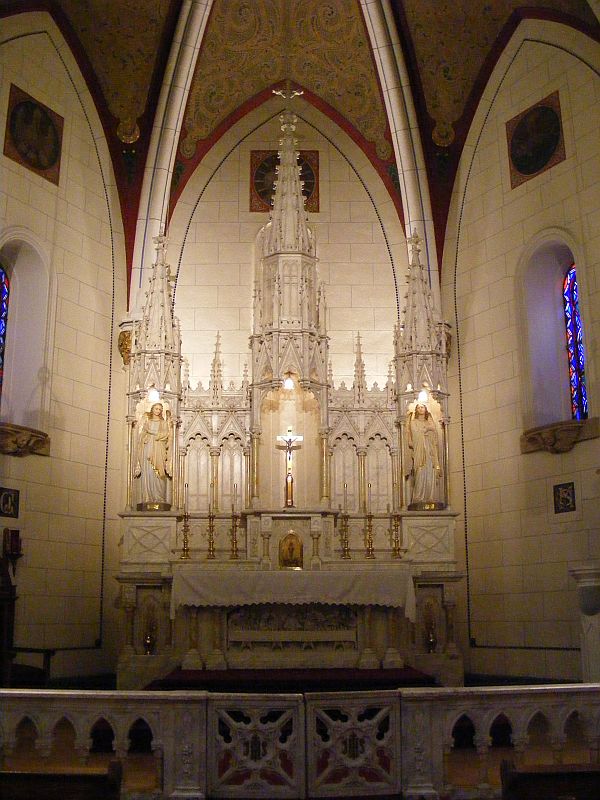 Front Of The Chapel

Start Of The Day

The day started out beautifully, heading east out of Gallup. Clouds chasing each other across the sky, rain in the distance.

Or not so distant.

In typical desert rainstorm fashion, it rained for about fifteen minutes, trying mightily to wash all these pesky cars off the road.

The shadows of the clouds allowed the brilliant color of the cliffs to stand out even more. Topping a rise, the mountains rise blue in the distance. Up close, the color of the land glows red thru the green of the grass. Every so often, the earth’s volcanic nature rises above the soil, leaving narrow tongues of broken lava littering the landscape. Sweeping vistas are broken up by buttes scattered in the distance. And up close. 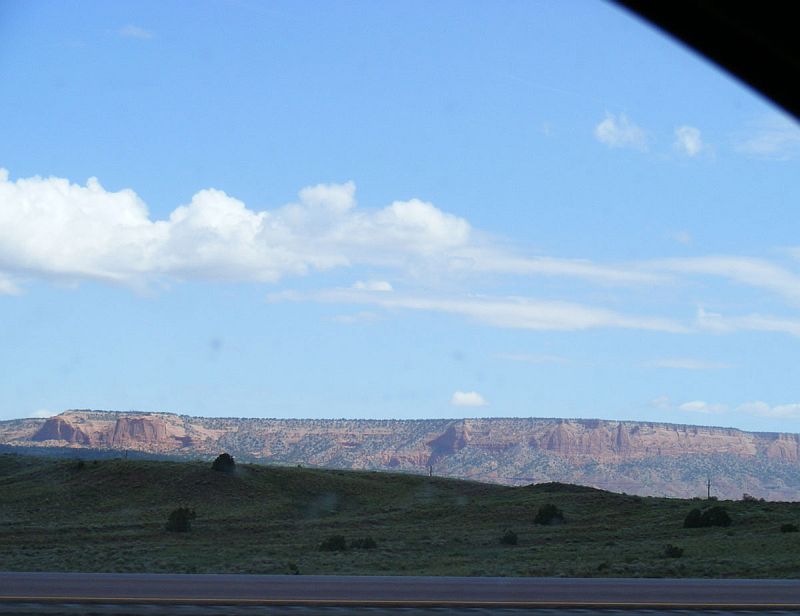 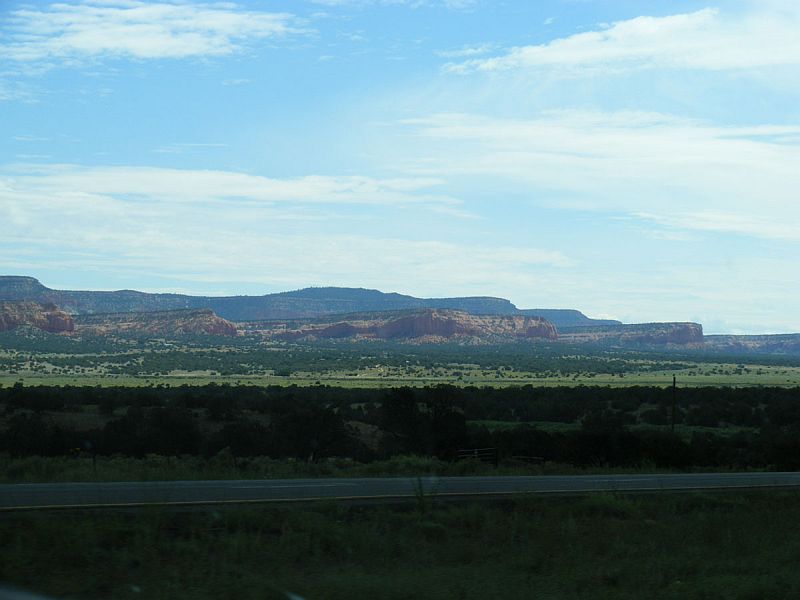 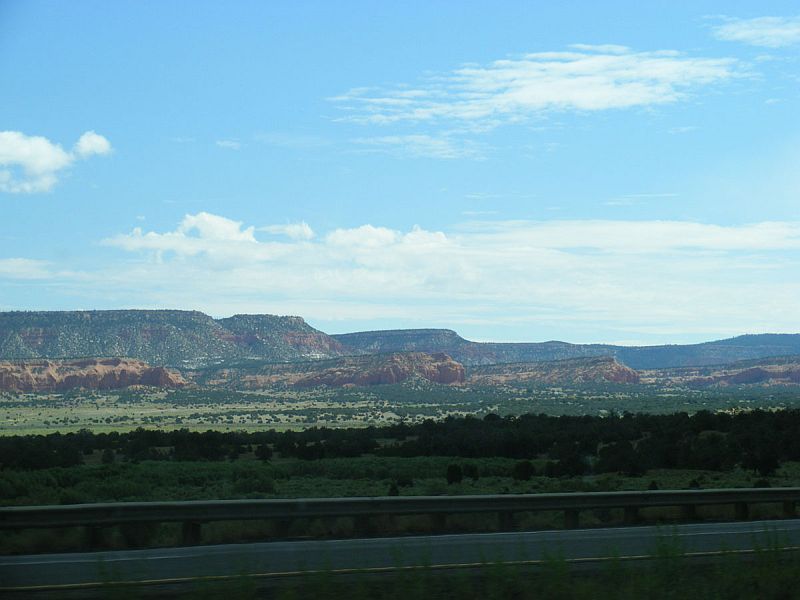 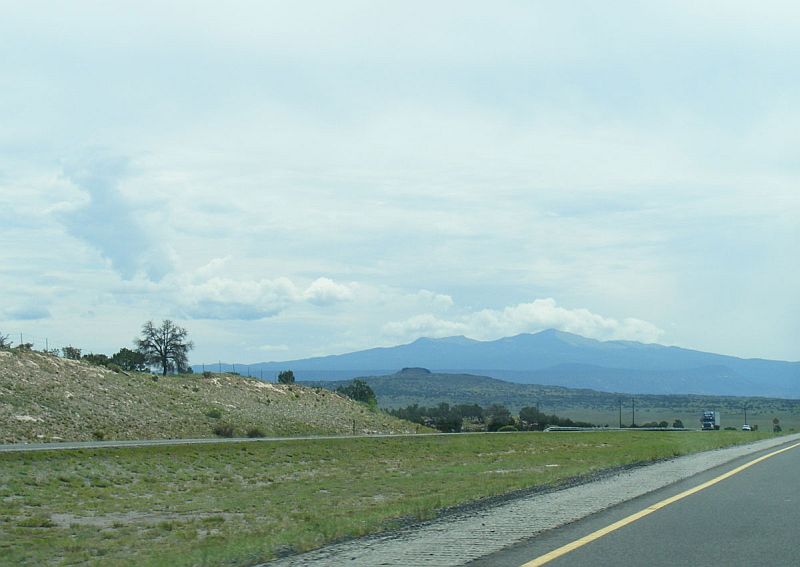 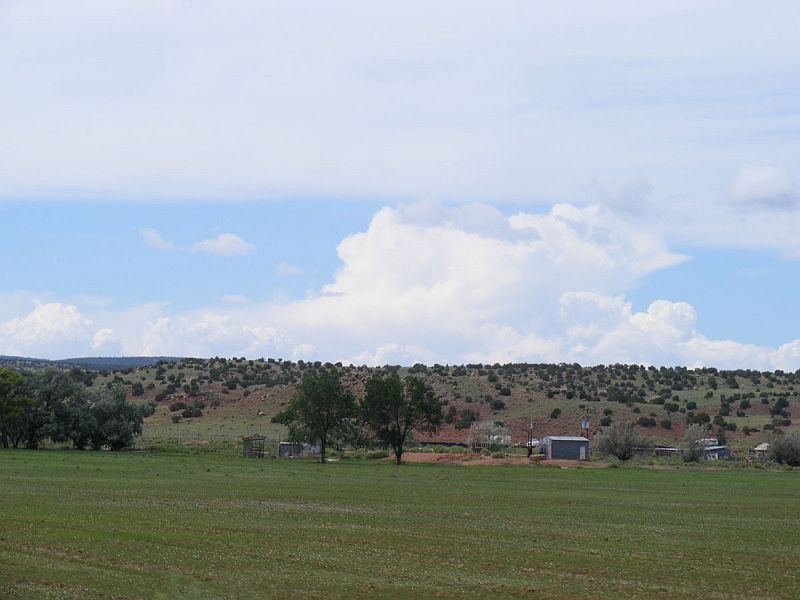 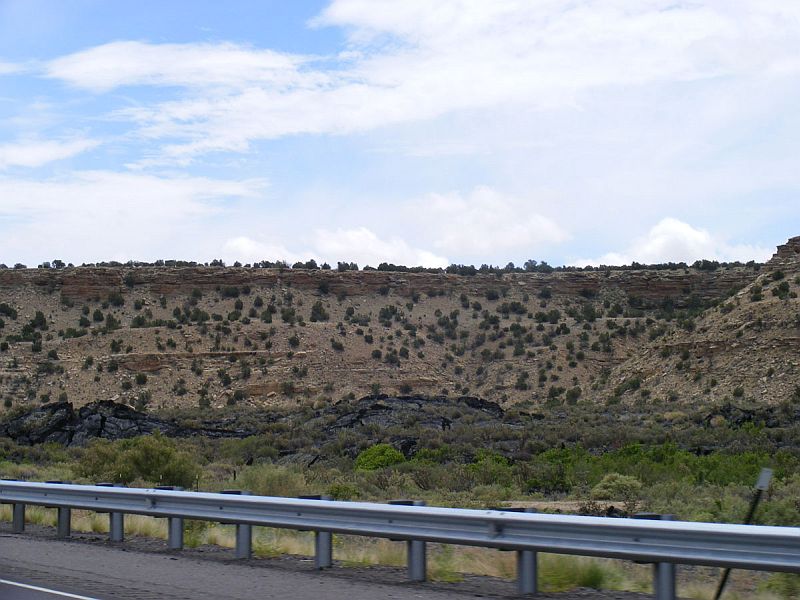 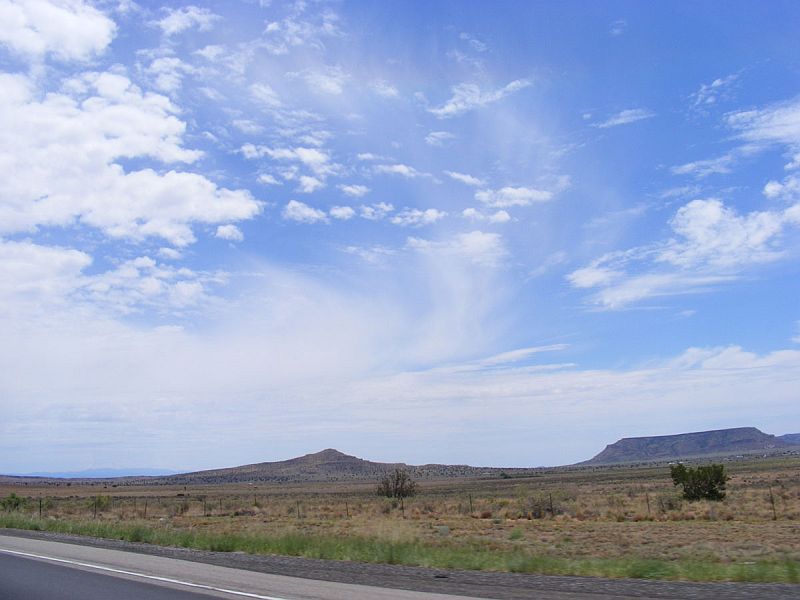 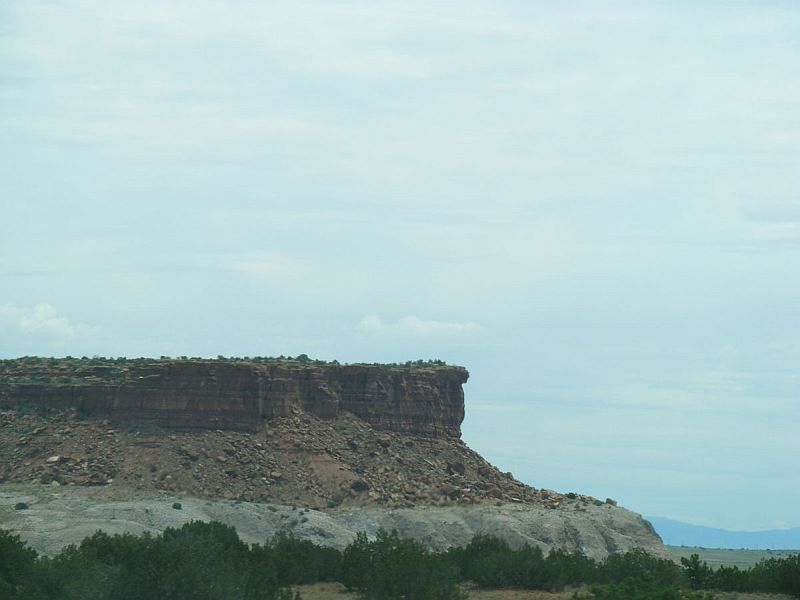 When I first saw Albuquerque, thirty years ago, I came in by Greyhound bus at sunset. The red of the mountains behind the bowl of the city framed Albuquerque in a ring of brilliant flame. For this trip, the flames live in my memory. Albuquerque lives at the base of the far mountains.

Downtown Albuquerque. If you look really closely, you can see the red of the hills behind. I see the color best with my heart, with my eyes closed.

I drove from Albuqueque to Santa Fe, so there aren’t so many pictures. The landscape was filled with hills and the long road ahead.

Coming in to Santa Fe, tucked into a bowl in the mountains, the city looked deceptively lovely. The fiendish desire to turn it into a modern pueblo village was not evident until much later. After realizing that I-25 went past the city, not thru it, we backtracked thru town to find our hotel. Then off all innocent and unknowing, to fight our way thru downtown Santa Fe.

An oft repeated phrase during this trip: “It is an adventure!”